"It is impossible to rightly govern the world without God and the Bible" George Washington, September 17th, 1796


George Washington's Farewell Address has long been considered the most significant political speech ever given to our nation.  He was the president who presided over the formation of the Constitution and the Bill of Rights.  He knew its intent and said "of all the dispensations and habits which lead to political prosperity; religion and morality are indispensable reports.  In vain would that man claim the tribute of patriotism who should labor to subvert these great pillars." 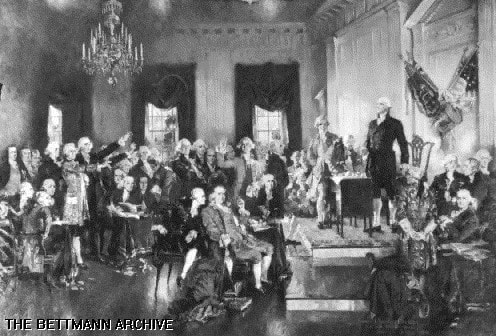 ​Patrick Henry:
"It can not be emphasized too strongly or too often that this great nation was founded, not by religions but by Christians; not on religions but on the gospel of Jesus Christ."                 -American Tract Society

John Jay:  First Chief Justice of the Supreme Court
"Providence has given to our people the choice of their rulers and it is the duty as well as the privilege and interest of our Christian Nation to select and prefer Christians for their leaders."

John Adams
"We have no government armed with power capable of contending with human passions unbridled by morality and religion."
"Our constitution was made only for a moral and religious people.  It is wholly inadequate to the government of any other."

Supreme Court -- 1799 Runkel vs. Winemiller
"By our form of government, the Christian religion is the established religion; and all sects and denominations of Christians are placed on the same equal footing."

1811 Supreme Court:  People vs. Rugglers
"Whatever strikes at the root of Christianity tends manifestly to the dissolution of civil government."

1892 Supreme Court Case--Church of the Holy Trinity vs. the United States
"Our laws and our institutions must necessarily be based upon and must embody the teachings of the Redeemer of mankind."  It is impossible to be otherwise.  In this sense, to this extent our civilization and our institutions are emphatically Christian.
-- decision back  by 87 Historical precedents!

1844 US. Supreme Court:  Vidal vs. Girard
"Why may not the Bible , and especially the New Testament...be read and taught as a divine revelation in the [school] its general precepts expounded and its glorious principles of morality inculcated?...Where can the purest principles of morality be learned so clearly or so perfectly as from the New Testament?"
--Court ruled Christianity must be taught in schools
House Judiciary Committee Report (March 27, 1854)
"Had the people [the Founding Fathers], during the Revolution, a suspicion of any attempt to war against Christianity, that Revolution would have been strangled in its cradle...at the time of the adoption of the Constitution and its Amendments, the Universal sentiment was that Christianity should be encouraged, but not any one sect [denomination]."  --In this age there is no substitute for Christianity...that was the religion of the founders of the republic and they expected it to remain the religion of their descendants.
--2 months later they added:  "The great vital and conservative element in our system [the thing that holds our system together] is the belief of our people in the pure doctrines of the divine truths of the Gospel of Jesus Christ."

George Washington's Farewell Address
"Let us with caution indulge the supposition that morality can be maintained without religion.  Whatever may be conceded to the influence of refined education on minds...reason and experience both forbid us to expect that national morality can prevail in exclusion of religious principle."

Abraham Lincoln:  (in response to someone hoping that God was on the Union's side)
"Sir, I am not at all concerned about that, for I know the Lord is always on the side of the right.  But it is my constant anxiety and prayer that I and this nation should be on the Lord's side."

1787 Constitutional Convention
Benjamin Franklin, June 28, 1787 reminded the delegates:
We needed God to be our friend and our ally.  We needed to keep God's "concurring aid."
"If a sparrow cannot fall to the ground without his notice, is it probable that an empire can rise without his aid?"
We've been assured in the sacred writing that, "Except the Lord build the house, they labor in vain that build it."  Thus Franklin called for regular daily prayer.

"Bless O Lord the whole race of mankind, and let the world be filled with the knowledge of Thee and Thy Son, Jesus Christ"             George Washington
​

​ Declaration of Independence "We hold these truths to be self-evident, that all men are created equal, that they are endowed by their Creator with certain unalienable Rights, that among these are Life, Liberty, and the pursuit of Happiness.
-Our rights are based on the fact that we are created by God.

James Madison--chief architect of the Constitution said about the Ten Commandments:
"We have staked the whole future of American civilization, not upon the power of government, far from it.  We have staked the future of all our political institutions upon the capacity of each and all of us to govern ourselves according to the Ten Commandments of God."

Benjamin Franklin:
"He who shall introduce into public affairs the principles of primitive Christianity will change the face of the world."

Thomas Jefferson:
"And can the liberties of a nation be thought secure when we have removed their only firm basis--a conviction in the minds of the people that these liberties are the gift of God.  They are not to be violated but with his wrath."  Indeed I tremble for my country when I reflect that God is just; that his justice cannot sleep forever."

"Separation of Church and State"
Not found in First Amendment or any founding documents.  In 1801 Danbury Baptist Church heard a rumor that the Congregational Church would be made the national religion.  In reply Jefferson wrote a letter on Jan. 1, 1802: "The First Amendment has erected a wall of separation between church and state."  The context is clear.  Our Nation is founded on Christian principles but not run by any one denomination.

This is our foundation, our source of our strength in the past as well as for the future
Please copy and distribute at will
Compiled by Rev. Christopher Gerardi,
Pastor and Director of Maine Maritime Ministry